The use of gravity bongs started a while back. Today, bongs are ubiquitous and are stacked in piles at head shops everywhere in the world. But who made the first gravity bong? The first modern glass bong was created by a guy called Cameron Carter. Bongs might seem timeless today, but smoking weed from a glass device is a recent and distinct American invention. Tower created the first handheld glass bong.

However, that doesn’t mean that Cameron Tower was the first person to smoke weed that passed through the water chamber. There is anthropological and archeological evidence of water pipes used for thousands of years in Asia and Africa. The early smokers didn’t use manufactured glass, but instead, they used natural materials to make pipes. In Jamaica, they used natural objects such as coconuts, bamboo in Thailand, or dried gourd in Africa to make their water-filled smoking gadgets.

Humans have been manufacturing glass for a long time, and crude glass pipes existed since the Romans blew glass vases. With difficulty using the crude glass pipes, the American studio glass movement intervened in the mid-20th century. In a bid to refine pipe making, Bob Snodgrass developed the first glass pipe making technique. He was touring the world with the Grateful Dead at the time and he settled down in Eugene, Oregon. This is where Cameron Tower headed during the spring of 1993 when he wanted to learn the art of making glass pipes. Tower said that he didn’t have a place and Bob never knew he was coming, but Tower had to make his dream of making glass pipes a reality.

When Tower got to Eugene, Bob Snodgrass was working on a glass water pipe, but he wasn’t happy with his first pipe’s awkward construction. The pipe Bob was making had a removable bowl and down stem, and a glass piece that sends weed vapor through the water and into the main chamber.

Tower, who was younger than Bob, took the idea and got a bit crafty. He fused it together, making a solid glass piece with the capability to hold water, could be easily cleaned, and had enough durability to last for years. Though there existed ceramic bongs made with a mixture of glue and ceramic, this was the first-ever bong made of glass.

After making the first glass bong, ideas for the gravity bong started flowing. No one is sure who invented gravity bongs, but the idea is thought to have come from young high school students exploring different ways to enjoy weed. The first gravity bong was a bucket bong and was created around the late 1990s. Making the gravity bong aimed to increase the smoking effects of different herbs, not only cannabis. The gravity bong gained popularity fast in the smoking culture as it is easy to make and works amazingly. Below are some types of gravity bongs that exist today. 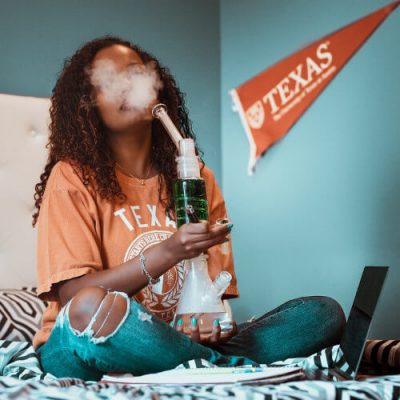 When considering how does a bong work, the gravity bongs rely on the science behind leaving a vacuum. When using the gravity bong, or a water pipe, water is pulled down by gravity, leaving a vacuum that is replaced by smoke coming from the ignited cannabis on the bowl cap. The bucket gravity bong uses a plastic bottle and a bucket of water. The small plastic bottle is cut off at the bottom. And immersed in water. The cannabis is placed on top of the bottle cap and ignited. The bottle cap is wrapped in aluminum to avoid burning and a hole is made to let in air. When you pull up the small bottle, it sucks in smoke from the burning cannabis. When the bottle fills with smoke, unscrew the cap and put your mouth on the bottle opening. Push the small bottle down and allow the water to propel the smoke into your lungs.

The waterfall gravity bong is similar to the bucket gravity bong. However, instead of pulling the bottle up to create a vacuum replaced by the smoke from the burning cannabis, you drain the water out of a large bottle from the bottom. This leaves the smoke intact in the bottle. When the water is all drained, plug the drain hole with tape or your finger. Remove the top cap, place your mouth on the opening and inhale the smoke directly into your lungs.

These two gravity bongs can be made with readily available materials at home. However, if you want the bong work for regular use, purchase a professionally built glass model. The professional models are made for the ultimate experience so you won’t go wrong with them. 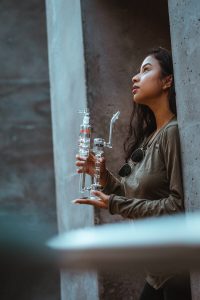 Where Was the Gravity Bong Invented?

Gravity bongs are a revolution of the standard glass bongs. The gravity bong was invented in the US, but where exactly is not known. How does a bong work is the reason for its invention is better known to be effective, the ability to save weed, and deliver an amazing kind of high.

When using a bong you supply your lungs with unfiltered smoke. The unfiltered smoke in the gravity bong contains a higher concentration of THC and all other components that are available in the cannabis. This device is, however, not for inexperienced or beginner smokers. The smoke is unfiltered, which means it’s harsher than smoke from a joint or pipe.

Most gravity bongs work similar; when you take a gravity bong hit, the smoke is propelled in your lungs and you might experience coughing. Even the veterans cough a bit when smoking from a gravity bong. If you aren’t used to harsh and unfiltered smoke with a high concentration of THC, a gravity bong might be too much for you. It’s one reason why even for the seasoned stoners, two or three gravity bong hits are enough. For the beginners, one hit is enough to give a one of a kind high. 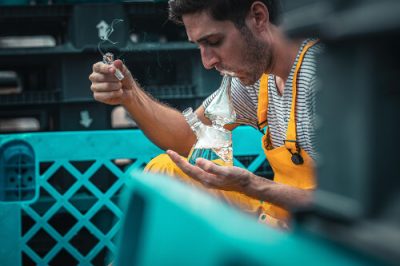 Have you ever asked yourself, when was the first gravity bong made and what was the smoking experience? It is believed that after Cameron Tower made the first handheld pipe, stoners experienced a different type of high they had never experienced. After they got used to it, they started exploring other ways to re-invent the bong to deliver a better or higher kind of high. This worked in their favor when they came up with a gravity bong. Using the gravity bong, one could get high with a single hit as long as one was willing to endure coughing and inhalation. This was when they came with the idea of using water to push smoke into your lungs with ease. After the gravity bong became a success, stoners started using it more frequently. But why?

Gravity bongs save a lot of weed. Consider the weed you would take from a pipe or a joint to get high. Compare this to one gravity bong hit that is enough to get a beginner so high. With a gravity bong, you use a smaller amount of weed and get stoned quickly. The smoke propelled into your lungs is unfiltered. This means it contains high levels of THC and other contents of the cannabis plant. It’s also one reason the smoke is harsher to the lungs. With a gravity bong, your stash doesn’t get quickly depleted. A little goes a long way.

Making a gravity bong is fast and easy and we haven’t even talked about the Thai word baung. You can use readily available materials at home to make your own gravity bong. However, purchasing a quality gravity bong is recommended, especially for avid stoners. You get one savvy gravity bong and safely and conveniently enjoy smoking anytime, anywhere. I think you’re getting the idea of how does a bong work.

The gravity bong is best for stoners who want to get high quickly. A gravity bong generates a lot of unfiltered smoke than all other types of bongs. This means when you take a hit, you receive a highly concentrated dose of weed and get stoned quickly. 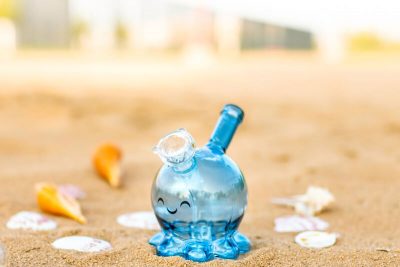 The Modernization of the Gravity Bong

In 2004, David Daily decided to modernize the gravity bong to create something savvy, with better design and materials. David saw the opportunity to upgrade a gravity bong into a stylish and safer design and he didn’t hesitate. He redeveloped the entire gravity bong system. He made a bottomless glass bottle and fitted it inside a glass base. The glass bowl was then specifically designed to hold the weed and the down stem, which sits on top of the lip, completed the design. It is the first all-glass gravity bong and he called it the Gravitron.

If you are into using gravity bongs, getting a savvy, high-quality bong might be the best option. It is more durable, has a better design, easy to clean and doesn’t alter your smoke’s taste.